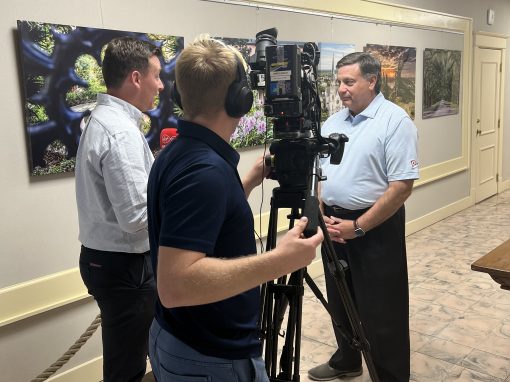 Upon inquiring about how Savannah exemplifies an Irish heritage in its current state, Marinelli pointed out a variety of highlights, including the Irish contribution to one of the city’s most photographed landmarks, Cathedral Basilica of St. John the Baptist, the impressive Irish pint served in the cozy Irish pubs around town, and of course, Savannah playing host to arguably the biggest St. Patrick’s Day Festival in the American South.

Marinelli also informed listeners about Savannah’s long-standing Irish population, who trace their roots back to Irishmen and women who fled Europe during the 1700s. A historical attraction named “Savannah Landing Point” at the Dunbrody Famine Ship Experience & Museum in New Ross, Ireland, depicts what Irish immigrants would have experienced when they arrived in Savannah in the 1840s and 1850s. A piece of Savannah stands in Ireland too!

Today, the connectivity between Savannah and Ireland lives on in the many commemorative elements like the Celtic Cross in Emmet Park, names of Savannah streets, Savannah’s Gaelic Associations, Irish walking tours, Irish flags adorning historic homes – and quite literally – through an airplane ticket from Savannah to Dublin using several of our flight options available through our top-rated Savannah/Hilton Head International Airport.

Visit Savannah thanks Virgin Media, and we hope that Savannah will be the top vacation destination for the people of Ireland.