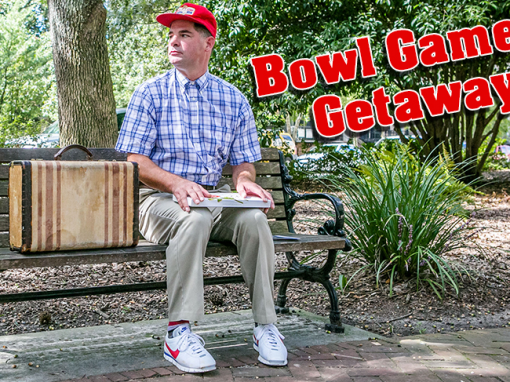 Over the winter holidays, Visit Savannah launched a video campaign to target fans traveling near Savannah for bowl games, encouraging them to stop in Savannah on the way to or from the big game. The digital content team was able to direct the four video ads to followers who are fans of schools playing in the bowl games using targeted Facebook posts, and then issue a call to action to visit.
Fans identified as potential visitors were targeted according to their home location and interests associated with teams playing in the bowl games. The videos featured John Sandifer as Forrest Gump encouraging fans of West Virginia University, the University of Kentucky, the University of Michigan and Georgia Tech to stop and spend some time in Savannah. The posts also direct visitors to a Bowl Game Getaway page at VisitSavannah.com with a list of three reasons to visit Savannah for a pre-game or post-game pit stop, and a “book now” button to make reservations easy. By the time the promotion had finished its run at the end of December, the four videos had racked up a combined total of more than 327,000 views.