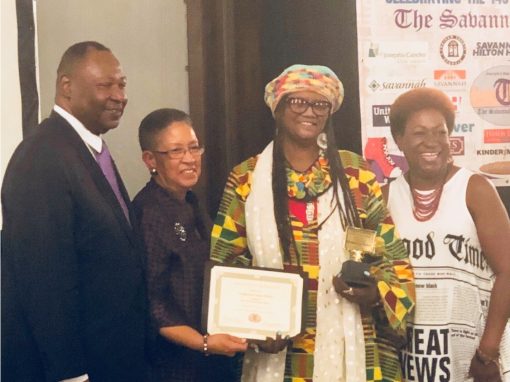 Visit Savannah Board Chair Honored by The Savannah Tribune

The current chair of Visit Savannah’s Board of Directors, local historian and former journalist Vaughnette Goode-Walker was honored by The Savannah Tribune last week for her contributions to broadcast and print journalism.
Goode-Walker was named a Broadcast Media Trailblazer by the Tribune at the celebration of its 143rd anniversary at The DeSoto Hotel. Over the course of her career, she has worked for WSOK Radio Savannah, WBIE Radio in Marietta, WVON Radio Chicago, ABC in New York and CNN International in Atlanta. She is pictured here with publishers Robert E. James and Shirley Barber James, and Vice President/Advertising Director Tanya Milton.