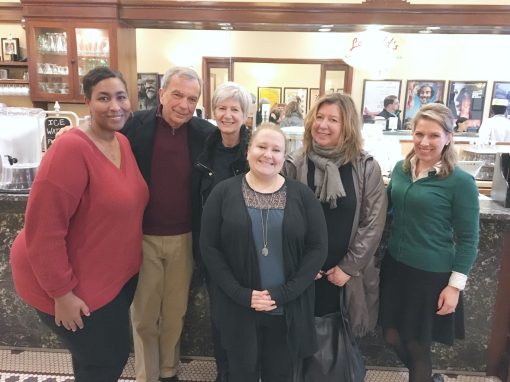 Earlier this month, Visit Savannah and Visit Tybee engaged local partners to host two London journalists who write for the London Daily Mail. Leopold’s Ice Cream treated the two writers to a sampling of the shop’s classic flavors and the story of how the company came to be as told by owner Stratton Leopold.
The journalists were hosted as part of a campaign to educate visitors from the United Kingdom about Savannah. British Airways is soon to introduce a new direct flight into Charleston, and Savannah wants to educate British travelers on how close Savannah is to Charleston and why they should spend time in both cities rather than just visiting Charleston. The writers are pictured above with Erica Backus, Visit Savannah director of PR; Stratton Leopold of Leopold’s; Summer Bozeman, Visit Savannah communications manager; and Sara Lane, director of Visit Tybee. They are pictured below at the ice cream tasting with Carey Ferrara of Leopold’s.

Founded in 1896, the Daily Mail is the the United Kingdom’s second-biggest-selling daily newspaper after The Sun.