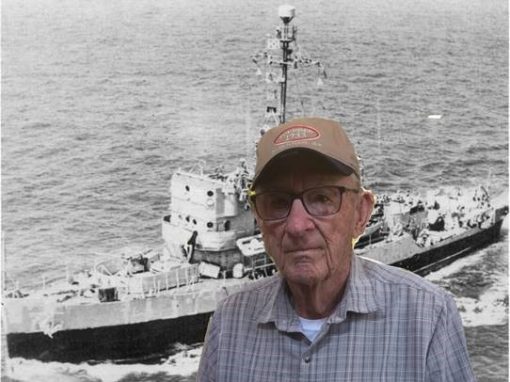 “I’m in Savannah to reminisce,” he said. “I came here in 1944 as a young sailor assigned to the USS Implicit (AM-246), an Admiral Class minesweeper that was built here in Savannah.”

Walter served on the Implicit in the North Atlantic and later the Pacific. She ended the war in 1946 credited with two battle stars. Following World War II, Walter was at loose ends so he decided to join the Air Force. “I just figured I’d had enough of ship life,” the Kentuckian said. Something keeps drawing Walter back to Savannah. He also served at Chatham Field in the Air Force before it was renamed Hunter Army Air Field. Walter’s first stop (after the Visitor Center, of course), was the Ships of the Sea Museum.

Walter is pictured here in front of a vintage image of the Implicit.