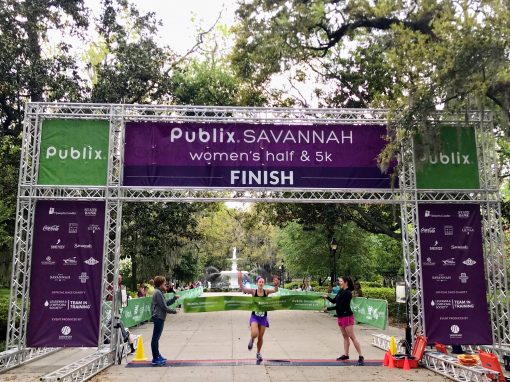 The Savannah Sports Council and title sponsor Publix collaborated for the 4th annual Publix Savannah Women’s Half Marathon and 5K on Saturday, April 7. The event attracted around 2,500 participants from 40 states, six Canadian provinces and ten countries. Publix has been the title sponsor for the event since its inception. Publix Field Marketing Coordinator for the Jacksonville Division Michelle Rochette says it is her “ . . . favorite event . . .” that they do. Rochette is pictured above with Savannah Sports Council Director Robert Wells.
The weekend began with a Fashion Fitness Expo at The DeSoto Hotel, where racers picked up their info packets and race bibs and had the opportunity to purchase official race merchandise as well as merchandise from local vendors and makers.

On Saturday, the race began at the south end of Forsyth Park before the 5k and half marathon courses diverged.

The first place finisher in the 5K race was Becky Dougherty (below).

The first place finisher in the half marathon was Alice Rogers (below).

Full race results and times are available here at SavannahWomensHalf.com. The races concluded with a post-race celebration at Forsyth Park.

The following morning, participants wound down and rounded out the weekend with Yoga on the Square, presented by Dancing Dogs Yoga in Ellis Square.

Follow the #SAVWomensHalf hashtag on Twitter and Instagram for more images of the weekend’s activities! And mark your calendars for the first weekend in April, 2019, for next year’s women-centric 5K and half marathon!