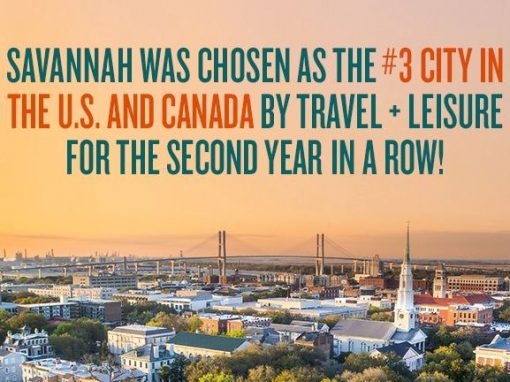 Savannah Ranked No. 3 City in U.S. & Canada by Travel + Leisure

Savannah has been named the No. 3 city in the U.S. and Canada in Travel + Leisure’s World’s Best Awards for the second year in a row. The ranking was decided by the publication’s annual readers’ poll.

“The real value in such a high ranking for Savannah is that it comes from the readers of Travel + Leisure magazine,” said Joseph Marinelli, Visit Savannah president. “More people are visiting and learning about our city, and in today’s world of social media, creating that kind of buzz offers a level of first-hand marketing and promotion that is difficult to duplicate.”

According to Travel + Leisure’s website, each year readers are asked to vote on “hotels, destinations and companies that define the very best in travel.” Savannah moved from the No. 7 ranking in 2013 to its spot at No. 3 in 2014.

“This type of positive exposure goes a long way to helping us tell the great story of the overall Savannah experience. Great restaurants, new retail offerings, terrific tours and attractions – all in a destination that people want to visit,” said Marinelli.

Other cities ranked in the top five for U.S. and Canada were Charleston, S.C., New Orleans, Santa Fe, N.M., and San Francisco.