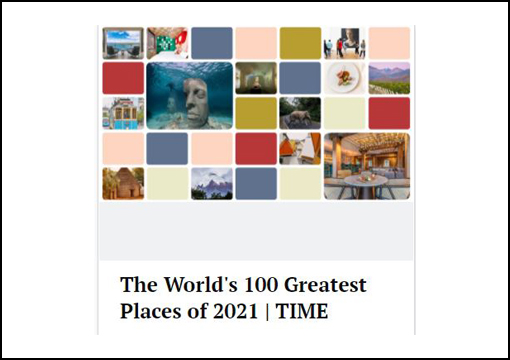 “Incredible!” said Joseph Marinelli, president of Visit Savannah. “The news of Savannah being named to TIME’s ‘World’s Greatest Places’ is one of the greatest honors and most valuable accolades in our city’s history. With readers all over the globe, this kind of exposure for our community is unmatched and truly puts Savannah at the forefront of the greatest visitor destinations in the world.”

To compile this list, TIME solicited nominations of places – including countries, regions, cities and towns – from its international network of correspondents and contributors, with an eye toward those offering new and exciting experiences.

“On behalf of the residents of Savannah and Chatham County,” says Marinelli, “we say ‘thank you’ to TIME for this wonderful recognition, and we look forward to seeing the article in the next issue.”
The full TIME World’s Greatest Places list will be featured in the August 2, 2021 double issue of TIME, available on newsstands now!