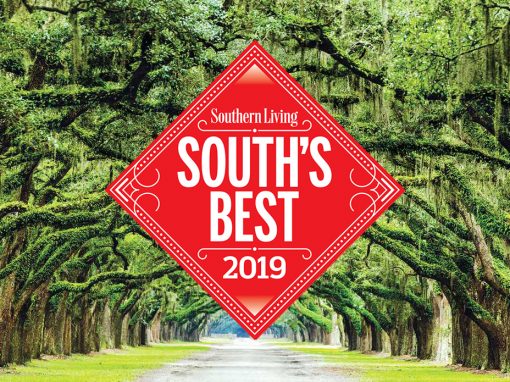 Southern Living magazine announced the winners of its third annual South’s Best Awards, ranking the region’s best cities, chefs, hotels, restaurants and more.
Savannah was lauded as one of Southern Living’s “Best Cities”coming in No. 2, “Best Food Cities” coming in at No. 3, and Visit Savannah partners The Grey and The Mansion on Forsyth Park and The Kehoe House took honors for “Best Chef” and “Best Inns,” respectively.

“Wow, the readers of Southern Living have come through again for Savannah,” said Joseph Marinelli, president of Visit Savannah. “Ranking us as the number two city in the South is truly quite an honor. And to be listed among so many other great cities is not only very special but also a testament to the unique brand of Savannah’s southern hospitality that the people of our community extend to our visitors each and every day.”

“At Southern Living, we’re passionate about celebrating the extraordinary people and places that define Southern hospitality,” said Sid Evans, editor in chief of Southern Living. “Our goal is to identify the destinations our readers are loving the most right now— places that represent the very best of the South. This year’s awards represent a unique mix of newcomers and longtime favorites.”

Read all about Savannah in the April issue of the magazine, hitting newsstands March 22. For more information on Southern Living’s 2019 South’s Best Awards check out their website at SouthernLiving.com.