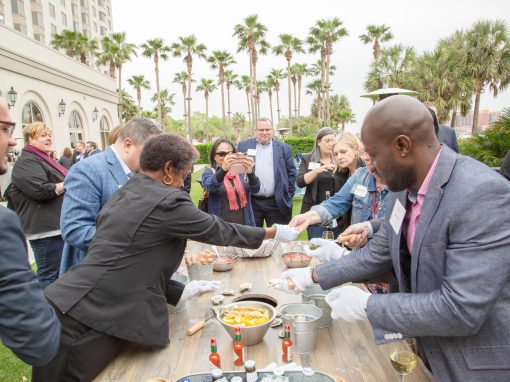 Last week, Visit Savannah hosted the PCMA (Professional Convention Managers Association) Annual Spring Board Meeting. This is the first time that this prestigious group has ever held these meetings outside of their home base of Chicago and Savannah was chosen due to attractiveness and popularity as a meetings destination. Visit Savannah Senior Vice President Jeff Hewitt formally welcomed the group and they were treated to an oyster roast on the front lawn of the Westin Savannah Harbor Golf Resort & Spa. Meeting and convention planners often serve in the role of “decision recommenders” as to where their organization’s events are planned, so showcasing our city to this elite group of professionals was a coup for Savannah and our sales team has already received its first request-for-proposal from the event.
PCMA’s president & CEO Sheriff Karamat reported in a testimonial video that “the city has been so welcoming.” He described the process of booking and implementing their first meeting as seamless and easy, and said that most of the delegates “don’t want to leave and are extending their stays.” Karamat “came to Savannah with big expectations, which were not just met, but exceeded, which just speaks to this amazing destination.” Click here to see the video with all of Karamat’s remarks.

Visit Savannah staff plans to send a Leopold’s Ice Cream Afternoon Break to the PCMA offices as a thank you for their business and for helping us show-off Savannah.