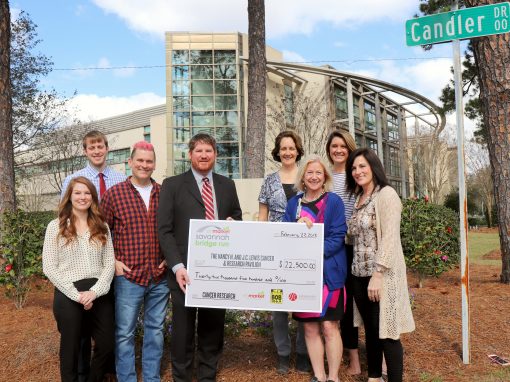 The Enmarket Savannah Bridge Run and event partners presented a check for $22,500 to The Nancy N. and J.C. Lewis Cancer & Research Pavilion at St. Joseph’s/Candler, the official charity of the Bridge Run, from fundraising efforts from the 2017 race.
Partners of the Enmarket Savannah Bridge Run include Enmarket, Dick Broadcasting‘s BOB 106.9, St. Joseph’s/Candler Foundations and the Savannah Sports Council. In addition to the Bridge Run’s donation of a portion of their race proceeds, Dick Broadcasting (formerly Alpha Media) participated in the fundraising effort by collecting $10 donations from morning show listeners to have the name of someone touched by breast cancer tattooed on show hosts’ bodies with henna ink before they ran the December 2 race.

The Lewis Cancer Pavillion at St. Joseph’s/Candler is home to a team of highly-trained cancer specialists who use high-impact technological screening and treatment options for optimal results. The Pavilion was named in honor of the generous support provided by Nancy N. and J.C. Lewis, one of Savannah’s most philanthropic families.