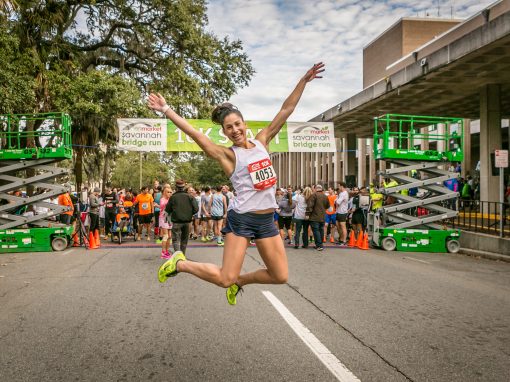 This month, the Savannah Sports Council signed a contract with Enmarket to extend their title sponsorship of the Savannah Bridge Run through December of 2019. The Bridge Run is the Sports Council’s longest-running event, taking place every year since 1991. The 2018 race, scheduled for December 1, will mark the 15th year of Enmarket’s title sponsorship.
The Enmarket Savannah Bridge Run weekend kicks off with a Health & Wellness Expo Friday, November 30 at the Savannah Civic Center where participants can pick up their packets as well as shop official merchandise and vendor booths. Saturday morning race options include a 5K, 10K, Double Pump and Kids Run, starting at the bottom of the Talmadge Bridge on the Hutchinson Island side of the river. After crossing the finish line on Montgomery Street, racers can revel at the Michelob Ultra Post-Race Party presented by Host South in Franklin Square. Costume contest winners will also be announced at the party, with cash prizes announced in first, second and third places for groups and individuals.

For more information about the 2018 race, visit SavannahBridgeRun.com.