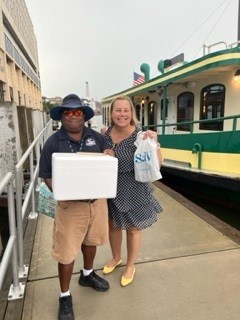 In celebration of Service Week, Visit Savannah extended a great thank you to the hard-working Savannah Belles Ferry staff last week. They were treated with some Leopold’s ice cream and Visit Savannah goodies! Thousands of visitors and convention goers each year rely on these convenient ferries for transportation between downtown and the convention center. Visit Savannah wanted to show their support to the ferry staff for their continued hard work and dedication.