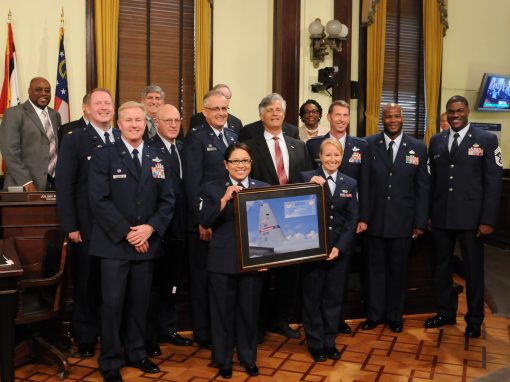 The governing bodies of the greater Savannah area paid special recognition to the 165th Airlift Wing in recognizing the unit’s 70 years of service to the state of Georgia and the nation. On Friday, September 23, 165th Operations Group commander Col. Hal Davis accepted from Al Scott, Chairman of the Chatham County Commission, a resolution honoring the wing for their service and dedication over the past 70 years. Major Brannon Bowman, the wing chaplain, was named Pastor of the Day by the county commission and led the nine-member panel in a devotion and prayer.
The following week, the mayor of Savannah presented 165th Airlift Wing Commander Col. Speedy Gomez with a resolution proclaiming October 1, 2016 “165th Airlift Wing, Georgia Air National Guard 70th Anniversary Day in the City of Savannah.” Once again, Chaplain Bowman was asked to lead a prayer in blessing the men and women of the military services. The 165th Airlift Wing traces its history back to the Army Air Corps and was founded in 1946 as the 158th Fighter Squadron. The 165th Airlift Wing is older than the U.S. Air Force and is headquartered at Savannah International Airport.