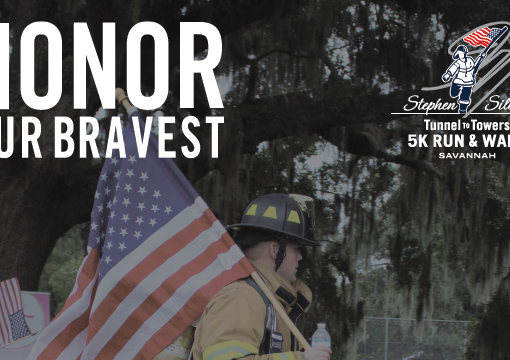 This Saturday September 8, the annual Stephen Siller Tunnel to Towers 5K is taking place in communities across the country including Savannah to honor America’s first responders, and to remember the victims of September 11.
On September 11, 2001, Stephen Siller, a firefighter assigned to Brooklyn’s Squad 1, had just finished his shift and was on his way to play golf with his brothers when he got word over his scanner of a plane hitting the North Tower of the World Trade Center. Upon hearing the news, Stephen called his wife Sally and asked her to tell his brothers he would catch up with them later. He returned to Squad 1 to get his gear.

Stephen drove his truck to the entrance of the Brooklyn Battery Tunnel, but it had already been closed for security purposes. Determined to carry out his duty, he strapped 60 lbs. of gear to his back, and raced on foot through the tunnel to the Twin Towers, where he gave up his life while saving others.

The Tunnel to Towers Foundation is proud to host events across the nation. In 2017 it hosted 47 Runs and Climbs and expanded its reach in 2018 to more than  65 in new cities like Myrtle Beach, Grand Rapids, Peoria, Virginia Beach and North Conway. Proceeds from the events support the Foundation’s programs, which benefit first responders, and catastrophically injured service members through its Smart Home Program. Click here to learn more about the Foundation’s programs and events.

The Tunnel to Towers 5K Savannah begins in Orleans Square and winds through downtown and Forsyth Park to return to Orleans Square. Click here for the full route. This race may affect business downtown and may cause traffic incursions, so please be aware.