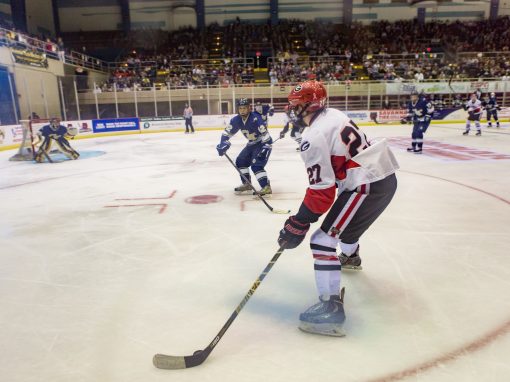 The Savannah Sports Council is proud to announce Enmarket as the new title sponsor for its Savannah Hockey Classic, an annual matchup among collegiate hockey teams from The University of Georgia, Georgia Tech, The University of Florida and Florida State University. The 2019 tournament will mark the event’s 20th anniversary.
“Enmarket is the perfect partner for the 20th Anniversary of Savannah’s number one sports event,” says Sports Council Director Rob Wells. “We are looking forward to promoting the Hockey Classic in partnership with Enmarket at all of their area stores and bringing fun and exciting on-ice promotions to the games.”

Enmarket has signed on as title sponsor for 2019 and 2020. The Sports Council has enjoyed a productive partnership with Enmarket, which has been the title sponsor of the Enmarket Savannah Bridge Run for the past 15 years. Adding sponsorship of a second major Sports Council event demonstrates Enmarket’s commitment to both the Council and the community.

Enmarket’s director of marketing Matt Clements echoes Wells’ excitement about the sponsorship. “We are thrilled to announce a second partnership with the Savannah Sports Council. Enmarket is committed to supporting the Council’s efforts to organize and promote outstanding events here in our hometown of Savannah. Becoming the title sponsor of the Savannah Hockey Classic is an extension of this support and aligns with our mission to enrich life in our community.”