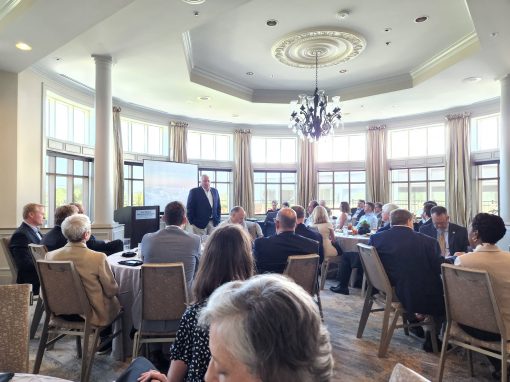 The Chamber hosted a luncheon for the CEO and Owner’s Council this week where Trip Tollison, CEO and President of the Savannah Economic Development Authority (SEDA) shared the details of how Hyundai chose to locate in Bryan County.

This new facility, which is reported to be the largest economic development project in the State of Georgia’s history, will bring more than $5.5+ billion in investment from the Hyundai Motor Company and create 8,000+ jobs. Thousands of additional jobs will be created by various parts suppliers that will become public over the next few months. Governor Kemp led the State and the Georgia Economic Development by offering necessary incentives to Hyundai, thereby separating Georgia from many other states considered for the same investment.

In 2014 The Savannah Harbor-Interstate 16 Corridor Joint Development Authority (JDA) was created and that began the process of searching for an original equipment manufacturer and developing the necessary site for such a project. The JDA is a joint venture of Chatham, Effingham, Bryan, and Bulloch Counties, providing more than $15 million towards the purchase of the property. Under the Governor’s leadership, the JDA purchased the mega-site in 2021 by leveraging the proceeds of selling properties in Chatham County.

During the luncheon, Tollison and SEDA recognized many who contributed to making this announcement possible: County governments of the JDA, The City of Savannah, Thomas and Hutton, Georgia Power and Bouhan Falligant, along with several others who helped bring the project to fruition.

Any members interested in becoming vendors can find additional information by clicking here. 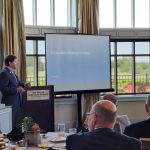 The Chamber extends a colossal Congratulations to Trip, all of SEDA, and its partners for the great success in securing the largest economic development project in Georgia’s history.