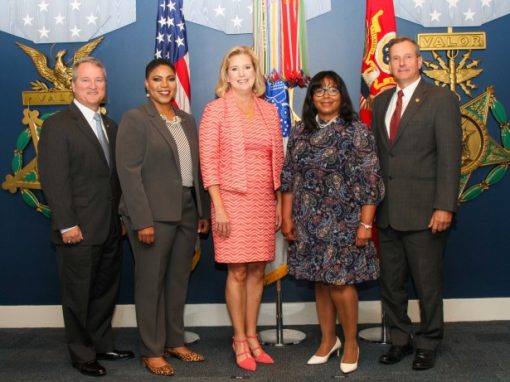 WASHINGTON – The U.S. Army appointed four new Civilian Aides to the Secretary of the Army during an investiture ceremony on Aug. 2, at the Pentagon, as Secretary of the Army Christine Wormuth swore in Nancy Jean-Louis from Woodbridge, Virginia; Angela Odom from Morrow, Georgia; Peter Hoffman from Savannah, Georgia; and Peter Crean Sr. from New Orleans, Louisiana.

“It’s an honor to welcome our four newest CASAs back to the Army team,” said Wormuth. “They served with distinction in uniform, and now as CASAs, they will be great advocates for the Army in their local communities. I have asked them to help share the Army story to help young people see how the Army can give them a sense of purpose and provide a fulfilling career.”

Nancy Jean-Louis served in the Army for over 25 years. She has an extensive network in Northern Virginia as a community leader and a business owner working in the residential real estate space. She has served as president of the Association of the United States Army Potomac-Liberty Chapter for the past three years and as its former vice president for membership. She is deeply engaged in the community as an active member of numerous community boards and councils. Her extended outreach includes efforts to build a strong relationship with Reserve Officer Training Corps programs in the area by participating in school programs and helping raise funds for more than 100 scholarships. In addition, in collaboration with two fellow Army veterans, Jean-Louis established the Prince William County Veterans Commission.

“I am honored and deeply humbled to be selected by Secretary Wormuth to serve my community and country in this new role,” Jean-Louis said. “One of the biggest takeaways from my military service has always been the feeling that no matter where I was, my military family was always there to support me. As one of the more than 800,000 veterans currently living and working in the commonwealth of Virginia, I feel compelled to foster that wonderful tradition in the community and share with those who have not had the benefit of serving.”

Angela Odom served 27 years in the Army and Army Reserve. She is a leadership and personal development coach. In addition to speaking and coaching, she is an author and hosts a leadership-themed podcast. Odom served in three separate combat operational deployments, commanded a battalion-sized element during combat operations in Baghdad, Iraq, for over 14 months, and earned a Legion of Merit and a Bronze Star. Odom felt so strongly about sharing the stories of the men and women she served with that she published a book about her experiences. Odom supports military veterans and their families in her role as a veteran advisory board member for the AARP Georgia. She also volunteers with the Association of the United States Army and the United Service Organizations.

“I am proud, humbled, and honored to be selected by Secretary Wormuth to serve as a civilian aide for Georgia (North),” Odom said. “This critical appointment allows me to continue my service to our Army’s greatest asset: its Soldiers and their families.”

Peter Hoffman served 30 years in the Army. He is the officer co-chair of the Fort Stewart Retired Soldier Council and serves on the Chief of Staff of the Army’s Retired Soldier Council. He serves on several governing boards, including the Mighty Eighth Air Force Museum and the Coastal Georgia Boy Scouts of America. Hoffman is also an active member of the Rotary Club, the American Legion, VFW, MOAA, AUSA and several other community-based organizations. Until recently, he was the vice president for student affairs at Savannah Technical College.

“I couldn’t be more excited by this opportunity to help share the story of our great Army,” Hoffman said. “As a retired Soldier, I understand the importance of keeping the community informed and building strong relationships. And I am very proud to live in and represent Coastal Georgia, a region highly supportive of the military.”

Peter Crean served 30 years in the regular Army. He is the vice president of education and access at the National World War II Museum. He is responsible for all content departments, including collections and exhibits, education, the Jenny Craig Institute for the Study of War and Democracy, and the WWII Media Center. Crean is a member of the Mayor’s Military Advisory Committee, American Legion Post 307, VFW Post 8973 and the Cincinnatus Club/Legion of Mars Mardi Gras Krewe. Crean served in several leadership positions with multiple deployments to the Middle East and the Balkans, overseas in Germany, and as an exchange officer with the Canadian Forces Joint Support Group in Kingston, Ontario, Canada.

“I am honored that Secretary Wormuth has entrusted me with the responsibility to be her representative in Southern Louisiana,” Crean said. “I’m thrilled to have the opportunity to continue to serve the Army beyond my time in uniform. I am grateful for the support of the leadership of the National WWII Museum as I start on this adventure. At the museum, we honor veterans’ dedication and sacrifice every day. I see service as a CASA as another way to serve veterans and those who currently wear the uniform.”

CASAs promote good relations between the Army and the public, advise the secretary about regional issues, support the total Army workforce, and assist with recruiting and helping our Soldiers as they transition out of the military.

Each state, the District of Columbia and the five U.S. territories have one or more CASAs appointed to provide a vital link between the Army and the communities they serve. CASAs are usually business or civic leaders who possess a keen interest in the welfare of the Army and their communities.