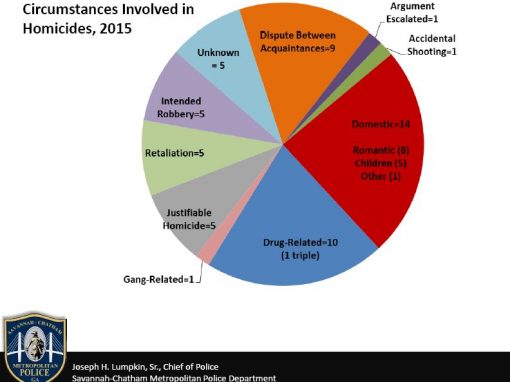 SCMPD is currently at 27 vacancies on the force, which is the lowest it has been in more than 10 years. One hundred twenty-six officers have been hired in 2016, versus 60 officers from the previous two years. There are 67 hired officers still in training, with 18 of those graduating from Patrol School on Friday, Feb. 5 at 10 a.m. in SCAD’s Arnold Hall on Bull Street. Of the 49 officers still in training after the graduation, 18 will be on the street, fully certified with a gun and badge, and paired with a field training officer for a few months. A record 45 applicants for the next police training academy, which starts in early April, participated in physical fitness and oral interviews last week, which indicates the potential for a full academy class of over 30 enrollees. The chart below indicates when all of the officers will conclude training.

The SCMPD police force is at 605 sworn officers, which will increase to 620 in a couple of months, as city council has approved 15 new officer positions for the Undercover Narcotics Investigation Team (UNIT). SCMPD’s attrition rate decreased from 17 percent in 2010-2014 to 6.8 percent in the last six months of 2015, which is below the national average of 10-12 percent. Only one officer has left in 2016 due to a family relocation.

The department also reported that Savannah finished 2015 with a total of 53 homicides, which does not include the five justifiable homicides that took place. The chart to the right indicates the circumstances surrounding all 58 homicides for 2015. This year, there has been one homicide as of the business advisory council meeting that was held on Jan. 26. SCMPD has experienced a 50 percent clearance rate for cases, which means that SCMPD detectives are at the national average in making arrests and clearing cases. A cold case unit is currently being formed in order to examine older homicides using experienced, retired SCMPD detectives.

Though Savannah has experienced a significant increase in crime, many are working hard to reduce this rate by taking proactive measures that will hopefully generate some more good news for our city.