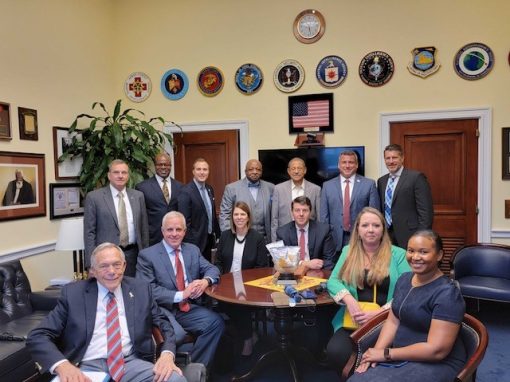 Chamber’s VP of Governmental Affairs, Jared Downs along with Chatham County Commission Chairman Chester Ellis and Savannah Alderman Nick Palumbo flew to Washington, D.C. last week with The Coastal Georgia Military Affairs Coalition. Their mission was to advocate for the continued building, development, and strengthening of the coastal Georgia community that supports Department of Defense activities, missions, installations, personnel, and families throughout the state of Georgia. The CGMAC had three objectives:

Community leaders met with members of the Georgia Congressional delegation on Capitol Hill on June 7th and with Army and Air National Guard leaders in the Pentagon on June 8th. At the beginning of each meeting, the group highlighted the exceptionally unique nature of the coastal Georgia region and the deep commitment, partnership, and support between the region and Department of Defense activities. For the Congressional Delegation, the group thanked the Members for their advocacy, for securing key meetings in the Pentagon, and for supporting ongoing projects in the coastal Georgia region. In Army meetings, the group highlighted coastal Georgia activities and sought to understand how to further partner with the Army. In Air National Guard meetings, the group forcefully advocated for the Georgia CRTC and sought to understand decision-making processes that led to the FY23 budget cut.

Meetings with the Georgia Delegation:

Senator Warnock thanked the delegation for prioritizing this trip and offered encouragement for our efforts in pursuing the Georgia CRTC budget appeal. Warnock welcomed the unity demonstrated by the collection of leaders, organizations, and communities represented in the CGMAC and committed to continuing to push the Air National Guard to restore funding to the Georgia CRTC.

Senator Ossoff expressed his support and advocacy of the CGMAC and our objective in restoring funding to the Georgia CRTC. Ossoff stated that restoring this funding was his number one retention priority for FY23 and committed to continuing to work with CGMAC and the Senate Committees to achieve this.

Representative Bishop expressed strong support for the CGMAC and the Georgia CRTC and indicated he would advocate for restoring funding in the upcoming budget.

Representative Scott similarly expressed strong support for the CGMAC, noting that he remained concerned about geopolitical events regarding Russia’s invasion of Ukraine and this was a poor time to consider closing any Department training ranges, and committed to continue pursuing restoring funding to the Georgia CRTC.

Representative Carter also praised the community for coming to DC and pledged his continued support to restore the funding to the GEORGIA CRTC. Also, he attended the meetings in the Pentagon on June 8th.

LTG Rainey stated he was glad to visit with old friends from coastal Georgia and congratulated the delegation on their unity and progress in working together as a community. LTG Rainey noted the heavy workload of 1st Brigade, 3rd Infantry Division deployed in Europe. He mentioned 1/3 having done multiple deployments and stated he expected to have that unit return from Europe later this summer. He also expected the Aviation Brigade to deploy at some time next year. LTG Rainey highlighted some of the current challenges in the force, notably in the area of recruiting new soldiers. LTG Rainey asked the group to continue to partner with local leaders and commanders in Georgia and help spread the word about military service to local youth. LTG Rainey also expressed an interest in the coastal community working with the Army to strengthen cyber infrastructure. COL Hoffman discussed the cyber efforts we began in 2019 but were discontinued because of COVID. LTG Rainey encouraged the Coalition to renew working with the Army.

Meeting with Mr. Ivan Bolden, Chief of Army Partnerships:
Mr. Bolden heads the Army Community Partnership Program, dedicated to assisting the entire Army enterprise and partners in identifying the appropriate partnership authority tool to execute mutually beneficial partnerships. Bolden highlighted the benefits of Intergovernmental Support Agreements (IGSAs) and noted the IGSAs that have been put in place in recent years with Fort Stewart, Hinesville, Long County, Liberty County, and Georgia Southern University. Bolden then presented information on the Defense Community Infrastructure Program (DCIP) grant award program, which allows the public and private sector to fulfill needs in infrastructure construction, improvement, and management in areas surrounding military installations. Bolden noted that Congress had increased the program to nearly $100M in FY23 and offered to assist the group up until the submission deadline with evaluating a project’s merits for this program. Chairman Ellis profiled the Emergency Operations Center (EOC) at the Savannah Hilton Head IAP and Mr. Howard profiled IGSA’s and discussed DCIP requests of interest to Fort Stewart. The Coalition invited Mr. Bolden to visit. He last visited in October 2019.

Meeting with Mr. Devin Cate, Executive Director, Air National Guard, and Mr. Robert Moriarty, Deputy Assistant Secretary of the Air Force for Installations:
Representative Carter and the group opened the meeting highlighting the incredible commitment of the local communities around the Georgia CRTC in supporting and developing the range capabilities, the many benefits offered by the Georgia CRTC, including range capabilities and capacities, opportunities for joint training, and cost efficiencies, and the opaqueness of Air National Guard decisions that led to cutting FY23 funding.

Mr. Cate outlined a string of justifications for closing the CRTC, but the decision seemed to rest on the Air National Guard’s (ANG) analysis that “margin” existed among the four CRTCs, and the full scope of training requirements could be met with just three CRTCs. Other justifications included:
a. The need to transfer the 68 ANG billets at the GA CRTC from training/non-deployable status to warfighting/deployable billets elsewhere in the force. (Note: When pressed, the ANG could not articulate how many such billets existed at the other three CRTCs, nor was this justification revisited again in the discussion)
b. The ANG did not fully “own” or “control” the range, as it does with the other three CRTCs (Note: the Delegation forcefully pushed back, stressing the ANG has never been hampered by a lack of scheduling authority, and the ANG should have assigned military value for joint nature of the GA CRTC, highlighting the GA is the only CRTC with available airspace capable of replicating high-end threats, and the only CRTC purpose built for the F-35 training.).
c. The GA CRTC was not included in Air Force future range plans, and therefore the Air Force was not planning future investments in maintaining the range. (Note: the ANG relied more heavily on this point, although they were not able to fully describe the timeline, scale, or scope of these range investments. The Delegation forcefully argued that portions of range costs are not included in planned Air Force range investments because coastal ranges are maintained by other Service Departments—thus, a huge cost savings.)
d. The GA CRTC does not provide “full-spectrum” training opportunities, as the ANG was not able to train on tactical-air control parties, air controller responsibilities, or base operating support requirements. (Note: the ANG relied more heavily on this point as well but were not prepared to explain what investments would be necessary at GA CRTC to allow for this training. Mr. Cate promised to respond to the group on this point.

At multiple points, Mr. Cate was asked directly, with no direct response: “Why would you close your most productive and your most-cost efficient range?” Although the ANG appeared to be searching for cost savings, the justifications for closure were wholly unrelated to a discussion of costs. Further, when pressed on the requirements for notifying Congress and BRAC triggers for closures, Mr. Cate and Mr. Moriarty were unclear if closing the other three CRTCs would have required notification and promised to respond to the group in a follow-up.

When asked directly for the ANG to restore FY23 funding for the Georgia CRTC, Mr. Cate stated the decision was out of their hands, as the budget request was locked and on the Hill. Mr. Cate deferred to the Congressional Committees (HASC/SASC & Approps) and the decisions they would make in their oversight roles. Regardless of Congressional action, the Delegation asked Mr. Cate and Mr. Moriarty if they would commit to working with the CGMAC on CRTC investment and funding decisions moving forward. Mr. Cate stated he and the ANG would commit to working “with all stakeholders” on this issue. 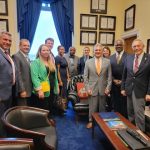 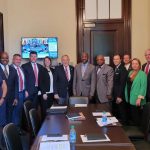