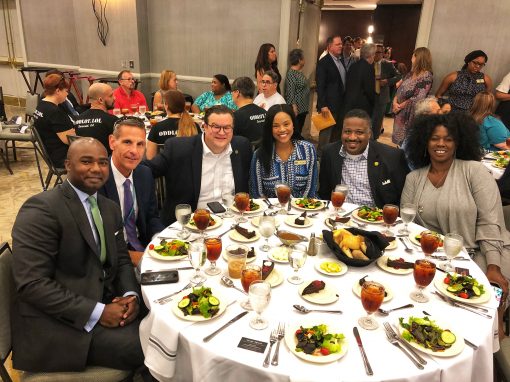 On Tuesday, September 11 over 250 Chamber members and guests gathered for an overview of the Savannah Film Industry. With the state of Georgia rapidly becoming one of the world’s top film locations, the future of Savannah’s film industry is bright. Savannah Area Film Office Commissioner Beth Nelson gave an overview of the industry’s local history as well as anticipated projections for growth and City of Savannah Director of Special Events, Film & Tourism Susan Broker shared logistical updates involving upcoming productions in the area.

The Savannah Film Office is a certified film commission, operating in partnership with the Savannah Economic Development Authority (SEDA), Chatham County and the City of Savannah. The local industry has experienced unprecedented growth with the annual economic impact rising from $8 million in 2011 to $137 million in 2017. With such promise for future expansion, SEDA has agreed to extend entertainment incentives that include a 10% rebate on qualified Chatham County production expenses.

Thank you to the Savannah Area Film Office, Savannah Economic Development Authority and Tourism Leadership Council for support of the event. Click here for a downloadable PDF of the event presentation for your reference.