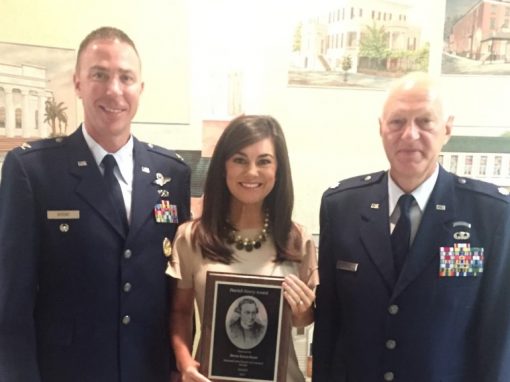 In September, the Chamber’s Director of Community Relations Drew Hunt was awarded the Patrick Henry Award by the National Guard Association of the United States. The award serves as the civilian counterpart to the NGAUS Distinguished Service Medal for National Guard members. The Patrick Henry Award is given in recognition of local civic leaders who have distinguished themselves with outstanding service over an extended period of time to the Armed Forces of the United States, the National Guard or NGAUS. According to the NGAUS website, superior performance of normal duty alone does not justify award of this honor; “an individual must have provided exceptionally strong support for the National Guard to clearly merit the award. The support of the individual must be such that the readiness and the future of the Guard have been positively affected and the results of the support should remain beyond the individual’s affiliation with the National Guard.”
The award was presented to Hunt by Lt. Colonel David Simons (right) and Colonel Pete Boone (left) at October’s Chamber board meeting.