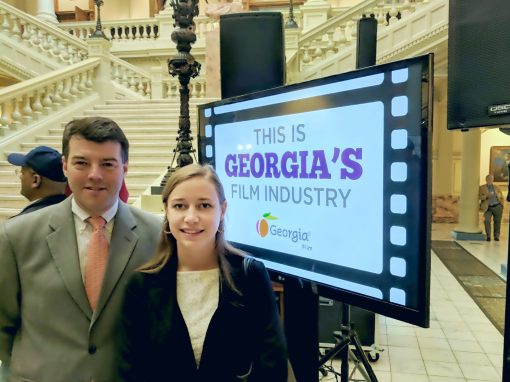 On February 27, Jared Downs, the Chamber’s director of governmental affairs, and Melissa Hayes, Visit Savannah’s group tour & entertainment manager, attended Georgia Film Day at the Georgia State Capitol. This event serves as an opportunity for those who work in the film industry in Georgia to come together to demonstrate to lawmakers the positive impact of film and television production in Georgia and how it continues to generate money for the state and jobs for residents. The end goal is to encourage current and future state government officials to retain Georgia’s tax incentives for film. Savannah has seen a dramatic increase in film business over several years, and we hope to see the incentives maintained so the industry can continue to benefit the community.
Visit Savannah offers a number of support services to productions in the area including sourcing crew housing, event planning services, and an exclusive “Film Perks Pass” that offers discounts at participating businesses.