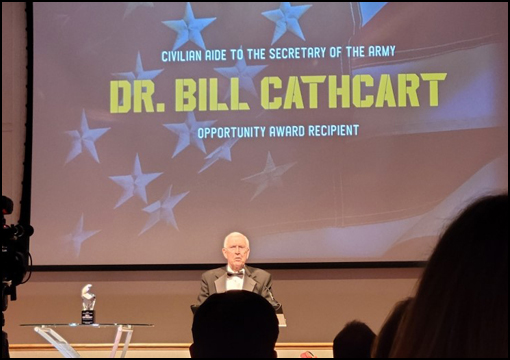 The Savannah Technical College Foundation Opportunity Award honors deserving leaders in our community for a lifetime of service in creating and enhancing opportunities for others to succeed. Proceeds support the College’s Freedom Fund military scholarship.

The STC Foundation honored Cathcart for his visionary and exemplary leadership in supporting and serving the military community throughout Coastal Georgia. He holds a Ph.D. and Master’s degree in Mass Communication (Ohio State) and a Bachelor’s degree in History (Hope College). Following ten years as a university professor in Illinois, he transitioned to commercial television station work in Minnesota.  Then, in 1985, he bade farewell to his snowblower and welcomed the opportunity to come to Savannah and WTOC-TV.  He retired from WTOC-TV in 2014 after 29-years of service, the last 24 as the station’s Vice-President & General Manager.

Cathcart’s Savannah-area community involvement includes past-Board Chair of the National Museum of the Mighty 8th Air Force (and a current board member) and continuing membership on the Savannah-Area Chamber of Commerce Board. Cathcart has also served as a past chairman of the Chamber’s current Military Affairs Council. He is also a Board member of the STARBASE Savannah Foundation (STEM instruction for area 5th grade students, hosted on Hunter AAF), a past Board member of USO Savannah, and a long-time member of the Rotary Club of Savannah.

He holds honorary member status with Hunter Army Airfield’s 1st of the 75th Rangers; Hunter’s 3rd of the 160th Night Stalkers; and the 3rd Infantry Division’s Combat Aviation Brigade (Hunter).  He has also been named a Third Infantry Division “Rock Star” (“Rock of the Marne”) at Fort Stewart.  Additionally, he served for many years as the Honorary Wing Commander of the Georgia Air National Guard’s 165th Airlift Wing in Savannah

In 2013, Cathcart was nominated by the 3rd Infantry Division Commander, Major-General Robert B. “Abe” Abrams, and selected by the Department of the Army to become the first Civilian Aide to the Secretary of the Army (CASA) for the Coastal Georgia Region, a position in which he continues to serve.

About STC’s Freedom Fund Military Scholarship:
STC’s Freedom Fund has supported 219 military-affiliated students with $130,151.11 in scholarship awards during the last five years. This needs-based fund provides up to 95% for out-of-pocket expenses for soldiers, veterans and spouses whose tuition assistance does not cover tuition, fees, books, or equipment. Examples of support for those who serve includes:

One in four STC students is a veteran, active duty service member or a military dependent/spouse. Last year, the College was ranked as the top Military Friendly® and Military Spouse Friendly School in the U.S. (2021-22). For the past four years, the College has been ranked as one of the top Best for Vets public technical and career college in the U.S. by Military Times.