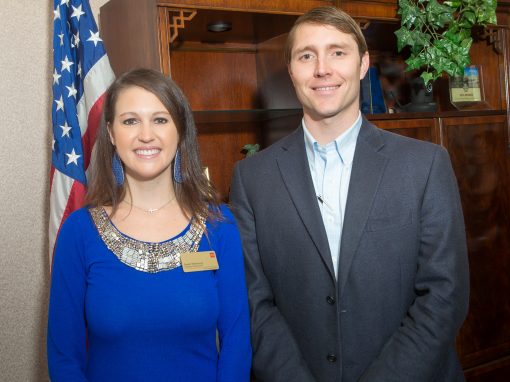 Ambassadors are representatives of the Chamber who volunteer as liaisons between the Chamber and its members. This group of 60 hard-working volunteers performs a key role in member relations and retention. The following stand-out members received awards for 2014:
2013 & 2014 Ambassador Chair

Thank you to Ryan Sewell for his commitment to the Ambassador Council for the past two years. One of the reasons that this Council has done so well is because of his forward-thinking leadership. He has always been there to encourage and guide the team and is one of the Chamber’s biggest advocates. We have been honored to have had Ryan as the 2013 & 2014 Chair.

F. Ryan Sewell, CPCU is a vice president in commercial lines with Bernard Williams & Co, a Keystone Partner Agent, specializing in hospitality and workers compensation. He is a Savannah native and graduate of Benedictine Military School and UGA’s Terry College of Business. Sewell was a Leadership Savannah graduate in 2012 and also serves on the Chamber of Commerce Foundation Board, the Terry College of Business Young Alumni Board, is a Board Member of Savannah/Chatham CASA, and an Advisory Board Member for Savannah Sports Council.

Sarah Westberry has been chosen as the 2015 Ambassador Council chair. She is a great example to our community of what our Chamber is all about. Her extraordinary commitment was recognized in 2013 when she was chosen as Ambassador of the Year. We are very pleased that Sarah will be our Ambassador Chair.

Sarah Westberry is a business associate for Wells Fargo Bank. She served as president of the Savannah Jaycees for the past two years and is currently the ambassador chair for the Savannah Chamber of Commerce. Westberry was named the 2013 Chamber Ambassador of the year and also the 2014 Georgia Jaycee of the year. She is currently studying accounting at Savannah Technical College.

2014 Ambassador of the Year

Each year the Chamber spotlights an outstanding Ambassador for their commitment to the council. This year the Chamber congratulates Jabron Webster for being selected as the 2014 Ambassador of the Year. This award goes to the volunteer who has shown outstanding commitment to the council by always attending the events and meetings. We commend him on his dedication and enthusiasm.

Jabron Webster is a native of Chicago, but has been in the Savannah area now for about four years. He is the regional operations manager for Jan-Pro. Webster is also a pastor at a church in the Sunbury community and is in the process of obtaining a doctorate in public administration.