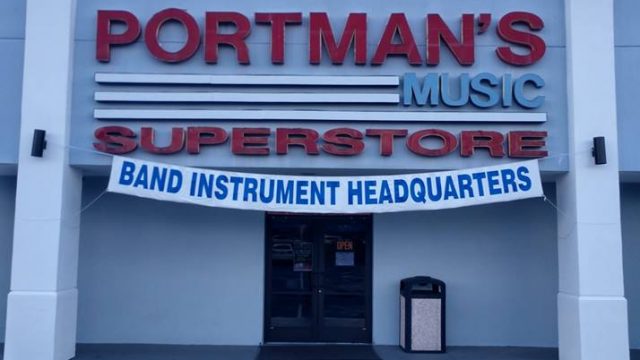 Portman's Music Superstore is one of Georgia's great music stores of the past, present and future. The roots of the store go back to Sam Portman, the grandfather of current owner Jerry Portman, who was selling musical instruments in a store on Broughton Street in 1910! Ben Portman started in his father's store in 1936 selling guitars and used instruments. He went on to become one of the first Georgia dealers of Conn and Selmer Band instruments, Gibson and Martin Guitars; and introduced Fender and Gibson electric guitars in the early 1950's.

By the 1960's, Ben Portman's MusiCenter had added teaching studios and was visiting schools all over Southeast Georgia and South Carolina. With the addition of sons Jerry and Michael, Portman's became the largest music store in this part of the U.S., widely acclaimed for the goods and services it provided the band and orchestra programs of all of the local school systems.

In 1993, Jerry and Michael Portman moved the store to a large location in the prime shopping destination of Abercorn St. Portman's Music Superstore while continuing to be the premier educational dealer in the region, increased it's commitment to serving all musicians with an expansion of its guitar, drum, keyboard and music technology departments. The staff that has been assembled is widely recognized for its expertise and ability to advise Portman's clients before and after they make their product choice.

In the past few years, Portman's has opened stores in Brunswick, Augusta and Albany Georgia to better serve their clients from those areas.